Napa, California is widely known for its wine. There are several vineyards and wine tours all up and down the area. Just as much as Napa Valley is said to have amazing wine, they also have delicious food. Restaurants and other food vendors are everywhere. There are several Michelin rated restaurants to choose from or more affordable and less fancy, but equally delicious establishments to choose from.  So when I got the opportunity to take the Foodies on Foot Food Tour, I couldn’t wait to taste all the different food! 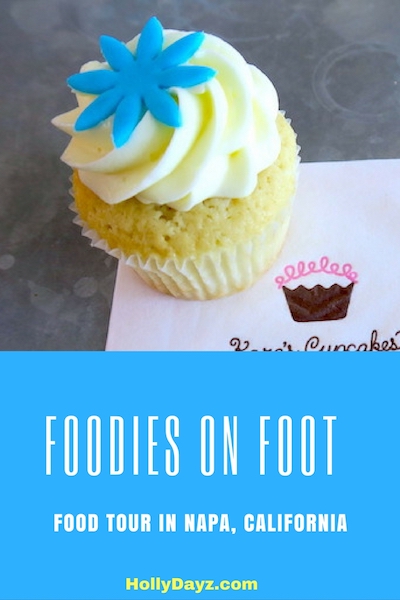 The tour started at 10:30am. The meeting location was the Oxbow Public Market, which is a Napa destination in its own right. It is a 40,000 square foot market place that also has outdoor seating. It is filled with local food vendors, artisan cafes, and local produce. It reminded me of a smaller version of Reading Terminal Market in Philadelphia. It was a perfect meeting spot, especially since it was very hot outside.

We were told to come on an empty stomach because we would be eating enough for breakfast and lunch as the tour was to be 3 hours long. Our first stop was outside and around the corner from the Oxbow entrance. We sat on a shaded bench with mini bottles of water awaiting us. We were handed some large English muffins, which are world-famous and were even featured on the Food Network’s ‘Best Thing I Ever Ate.’ Putting some jelly on it made it even more delicious and a great start to the tour.

Of course the food tour is not just eating food, but getting a nice walking tour and learning about the area, some history, seeing art pieces, and more. We definitely got that with our tour guide Sherry who was very informative and knowledgeable. We went inside Oxbow to try some more food. I informed Sherry that sushi wasn’t really my thing, I am more of a shrimp tempura kind of girl. She definitely changed my mind!

We sat down at a sit-down sushi bar. It was really nice and the hanging lights reminded a few of us of sea urchins. There was a big television and we were able to watch the sushi being made. We were given Mayan rolls. It has avocado and crab with salmon on top which was torched. It was good without the soy sauce, but even more delicious with it. Whenever I get back to Napa, I think I will get 2 orders of this!

We took a walk in the heat to our next food destination. We had a couple of little girls with us on the tour and was able to provide them with a couple of umbrellas to keep them shaded. Next top, a food truck where we got tasty beef tacos. I am not into spicy food, so I made sure mine was mild. It was good. We also learned that food trucks in Napa have a designated spot that is given to them, so you will always find them in the same spot.

We continued to walk and ended up at a bistro to eat an empanada. Didn’t look or taste like the typical empanada. This one was eaten with a knife and fork. The empanada had achiote marinated chicken, black bean puree, cabbage, avocado, lime crème fraîche, and queso fresco. It was really good.

Continuing to walk I couldn’t help but notice how quaint and beautiful downtown Napa is. Shelly even pointed out a historical building that was ruined due to an earthquake and rebuilt. We passed by many different art pieces. There was even a 9/11 Memorial that had pieces of the building standing. We all stopped and walked over to look at it.

Next up on the food tour waffle sandwiches. We were given a basket filled with them. They had several options, we were given the American Culture Club. It has turkey, bacon, tomato, American cheese, arugula, and chive aioli. For the vegans and vegetarians out there, they do have options for you! It was savory and extremely filling.

At this point we are all pretty full, but we are definitely not done with the tour. Some more walking led us to a chocolate shop. We were all given samples of Chardonnay peanut brittle, we are in wine country after all, and it was pretty good. I also got to try a peanut butter truffle which was also good. Then I just had to pick out a mint truffle. I could smell the mint before I even bit into it. At first taste it reminded me of one of those dinner mints, but it was really good.

The most unusual stop on the tour was a take-out spot tucked away in a liquor store. Not something any of us expected, but very cool none the less. There is where we were given a cup of Malfatti. I never had it before, but it was good. Being that it was hot outside and it was hot food, like eating soup, it wasn’t something I felt like finishing. For the most part I did though.

Onwards we walked. Until a couple of people just didn’t want to walk any more because it was way too hot and asked their husbands to get their cars. Understandably because that heat really was no joke. I definitely got a major tan walking out there. We passed a beautiful park area while we walked back to our original meeting spot and last place on the tour.

Last stop on the food tour was Kara’s Bakery, back inside the Oxbow Public Market. The air conditioning was welcomed as we stepped inside. The cupcake shop is well-known as the owner was a finalist on Cupcake Wars. I ordered a large lemon cupcake. It was absolutely amazing and I should have bought one and took it back to my hotel for later! Clearly I wasn’t thinking straight, I will blame the heat.

Overall the food tour was awesome! I loved that I tried things I never had before or would have tried on my own. Of course seeing some of the town and learning some history is always big on my list. Shelly was great and so were the other people on the tour. I really enjoyed talking with everyone. I was so full, I didn’t get hungry until around 10pm that night. I would highly recommend the Foodies on Foot tour in Napa. They also have another in Sonoma that I am sure would be equally as good.

Have you ever been on a food tour in Napa, California?

Disclaimer: Thank You to Foodies on Foot for having me. Whilst receiving an invitation all opinions and views are my own and have not been influenced.

Born and raised in Queens, NY; Holly is a producer and writer with a Master's Degree in Producing for Film & Television who's wanderlust has led her across the globe sharing pictures, tips, and her experiences to fellow explorers.

Fun Things To Do in San Diego, CA